Peter Hain was a man for whom I had a lot of respect in my youth.

When my sisters had posters of David Bowie and Donny Osmond on their bedroom walls I had a poster of Peter Hain on mine!

I have nothing but respect for Peter's valiant fight against Apartheid in the 60's and 70's, he was a national and an international hero, but despite his opposition to apartheid, Peter's political legacy seems to have been heavily influenced by SA apartheid PM Balthazar Johannes Vorster's mantra that opposing him was the same as supporting his opponents.

In true Vorster style Mr Hain claims that all votes against his party, be they from Plaid, Greens, Lib Dems, Communists, the SWP, Christian Voice, even supporters of birthday parties or Christmas parties are all closet evil Tories – any party, other than the Labour Party is the Evil Tory Party!

As a former supporter and one who use to have a great deal of respect for you, Peter, please don't transfer that sort of South African politics to Wales – we don't need it, we dont want it!
Posted by Alwyn ap Huw at 03:08 9 comments:

Labour's message of support for the Tories

During the 2011 Assembly elections Peter Hain and Carwyn Jones claimed that Wales could send a message to the Westminster administration by using the Assembly vote as a referendum on Wales' opposition to the ConDem government. It was a tactic that failed. The Conservative vote in Wales went up as did the number of Conservative representatives elected to the Assembly.

As a referendum on Tory policies the last Assembly elections actually gave the Tory's an endorsement. Wales was never ever going to vote Yes to Tory policy but as a result of Labour's campaign more people voted Yes than might have been expected otherwise and the Conservative vote was boosted.

Once bitten, twice shy, one might suppose. But no! Labour are trying the same tactic again; despite knowing that using the local government elections as a referendum on Westminster Tory policies will lead to many more Conservative councillors being elected in Wales. The question has to be asked:

Simply because it is in Labours interest to have more Conservative councillors in Wales. The Labour party has become so lazy, so stagnant, so bereft of original ideas for the betterment of local communities or for the betterment of Wales that it's only unique selling point is we are not Tories and the more Tory Councillors there are the more negative and not Tory Labour can be!

Wales deserves better! Wales deserves councillors, of all parties and of none, who put our communities first and who couldn't give a damn about sending a message to either Westminster or Cardiff Bay!

Don't waste this election as a referendum on any unrelated point, please use the election to elect a councillor who wants to represent your local community in your local council chamber as an honourable way of serving your community, rather than voting for nothing better than sending a V sign, that will be ignored, to Mr Cameron!
Posted by Alwyn ap Huw at 04:00 6 comments:

Don't sell our water, swap it for Beer!

The whole of the UK has a fairly temperate climate; there isn't any part of these islands that suffer from the true meaning of the word drought.

The problem isn't that "Britain" is short of water; the problem is a geographic imbalance of water usage!

Too many people live in, and too many water intensive industries are based in water poor areas, like the South East of England.

The answer to the problem isn't pumping Welsh water over hundreds of miles into South East England in order to enable those water guzzling industries to survive, the answer is to rellocate those industries to Wales where the water is plentiful.

Breweries use about a gallon of water in order to make a pint of beer; why should we sell Welsh water to drought infested English brewers for a pitance when we have enough water to make our own beer, that we can then sell to England at a premium price?

Don't sell our water, swap it for Beer!!!

One of the things that makes me hate left wing politics in general, and the Labour Party in particular, is the feeling that the left needs poverty and deprivation in order to justify its existence. If the Labour heartland was lifted out of hardship and became prosperous would it still vote Labour?

The answer is a resounding NO!

Because of that the areas that have voted Labour for the past 100 years are still the poorest and most deprived parts of the United Kingdom; places like the South Wales Valleys and Glasgow have been made poorer under every single Labour Government, voting Labour has worked against them, because if Labour had helped to lift those loyal communities out of poverty and hardship they might not vote for the poor man's party any more.

My feeling about Labour was confirmed this week by a, now erased, YouTube in which a Senior Labour Politician described rising unemployment and inflation as an orgasmic wet dream for the left; claiming, more or less, that the poorer people are the more likely they are to vote Labour – so poverty is good news for Labour.

There is a Nationalist argument, which is largely true, that Wales; since time immemorial, has been the poorest part of England and Wales / Great Britain / The United kingdom because it has been exploited and ignored – an independent Wales couldn't be worse off than an exploited Wales has been for the past 500 years!

Doesn't this make the ability to complain about exploitation and poverty and deprivation a wet dream for Plaid's left wing too?

Or can those of us who want Wales to succeed work together in order to create a vibrant Welsh capitalist / co-operative economy that serves Wales well and leads the people of Wales to believe that we are able to beat poverty and stand on our own two feet - rather than being chained to the left wing poverty trap!
Posted by Alwyn ap Huw at 04:05 21 comments: 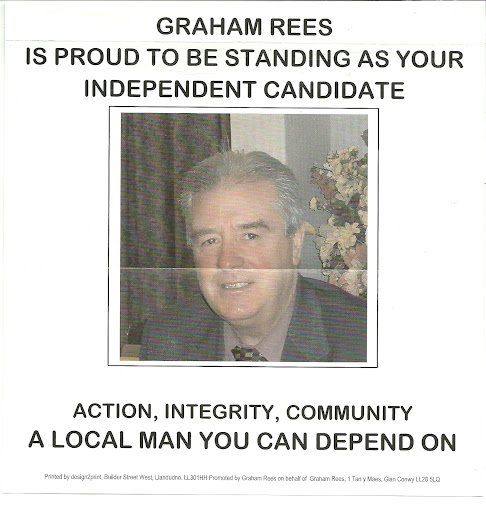