I have followed The Thoughts of Oscar Blog, for the best part of 7 years. I'll be honest; I have rarely agreed with Oscar, I have often thought that his posts are offensive, unfair and sometimes bitter. But that is a feature of democracy. People with whom I passionately disagree are entitled to express their opinions. And the disagreement is often what makes politics vibrant and fun. I would be a hypocrite to defend much of what Oscar has said but I do defend his right to say it.

Despite the fact that I would never vote for him, I have a fair regard for my Constituency MP Guto Bebb. He seems to be a good constituency MP, in the sense that if you complain to him about the drains, he'll do something about the drains – regardless of whether he sees a vote in it or not. I have had very many internet discussions with him and a couple of "live" ones; on each and every occasion he seems well able to defend himself and his point of view with erudition.

I am bitterly disappointed by Guto's decision to take legal action against the Thought's of Oscar Blog, which is ultimately an attempt to close the blog down, because Guto has never before shown himself to be averse to defending himself on the comments pages of blog posts.

The so called "libellous" statements in Oscar's Post An Open Letter to Guto Bebb are actually minutiae – the MP HAS received donations from Russian Oligarch Alexander Temerko that locals might find suspect, whatever the reasons behind the donations!

OK. I accept Guto's defence that the Oligarch didn't pay him for supporting Israel's attack on Gaza; but why was the donation made? In support of Welsh culture, language, agriculture, local entrepreneurship or other things that affect the constituency, or for reasons that are not constituency related? Your constituents should be told not sued Guto!

Our MP HAS appeared to support the Israeli government in its campaign in Gaza, images of which have sickened many of his constituents of all political persuasions. Tell us why you support Israel, Guto. Persuade us to see the righteousness of supporting Israel rather than suing us for having the temerity to disagree with you!

I don't know what sort of reading figures Oscar has. This blog has a couple of thousand on a very, very good day! I suspect Oscar has similar. Guto can respond (as he has done eloquently in the past) to all the readership of a blog in the comments section. He has a better chance of bending the ear of a journalist than Oscar or I have, he can speak in Parliament under privilege; so why does he need to sue a blogger and try to shut him down? There is clearly something in one of Oscar's posts that has touched a very raw nerve! Suing Oscar might shut the blog down – but it may also expose that nerve!

The sick part of the article is the way that the body count from the First World War is being used as an argument in the current referendum campaign; whatever the numbers surely both No and Yes campaigners should agree that the answer to the question How many Scots died in WW1? should be Too many and that coming to as accurate a figure as possible should be an academic exercise not a political one.

The interesting point about the article is that I have heard similar claims made about the percentage of Welsh dead in both the First and Second World Wars, and indeed in previous and subsequent wars; and I have heard these claims, as the article suggests, made in the context of Welsh nationalist “myth”; but the Welsh nationalist myth isn't part of the myth of "separation" or "independence"; but the myth that the Welsh / Scottish should be extra proud of being British because they have punched above their weight in Britain. This brings us back to the sick part of the article. For 100 years we are told that we should be extra proud of our nations' contribution to Britain; but as soon as that pride is taken out of a British context we are told, as they say in Scotland, that that proud contribution is just a load of old pish! 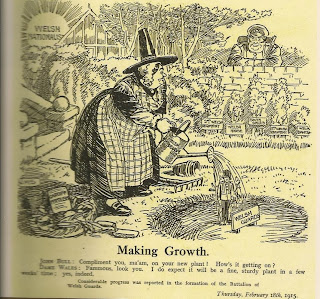 I bought a book last weekend Dolgellau and the Great War by D T Sheppard which gives details about the 107 people whose names are engraved on the Dolgellau Cenotaph. The introduction to the books makes the important point:

"These people weren't statistics but individuals with their own unique stories"

Many of those mentioned in the book were related to my late Grandparents; most were their friends, neighbours and acquaintances. Although, obviously, too young to have known any of those commemorated in the book, many of the names were familiar to me. Attending the Armistice Parade as a Cub and a Scout in the 1960's and 1970's I got to know the antitheses of Binyon's famous poem – those who HAD grown old, all were ordinary working class people, people like my Dad and my Taids - nothing special!

I've looked up some of the names mentioned on the Cenotaph on the Welsh Newspapers site. Where they are mentioned in pre-war stories their ordinariness is striking: took part as a shepherd in the chapel nativity play, or came third in the seed potato class in the village show, even appeared in court for being drunk on fair night.

A term I heard oft used yesterday was heroes; but those lads remembered on Dolgellau's and other Cenotaphs were NOT heroes; they were just young men with the same fears and aspirations, the same strengths and weaknesses, the same hopes and disappointments as the rest of mankind. To laud them as Brave Heroes doesn't exault them it diminishes them by turning them into comic book characters rather than accepting them as the ordinary blokes that they really were.

There are too many names on cenotaphs that share my family names for me to take some moral outrage at the act of commemorating the Great War, despite my misgivings. At the going down of the sun and in the morning, I will remember them; but I will remember them as the real people that they were not as caricatures of imperial propaganda that too much of the Remembrance Industry has already tried to make of them.
Posted by Alwyn ap Huw at 08:21 No comments: