This Asda be the funniest campaign report this year!

I can't stop laughing at this hilarious report from STV News about Iain Gray popping into an Asda store where Alex Salmond was doing a meet and greet.

Iain Gray and Alex Salmond have accused each other of hiding and running away during a visit to an Ardrossan supermarket.

Scottish Labour claimed that Mr Salmond "hid" from Iain Gray when the two leaders found themselves in the same supermarket on Tuesday night.
However, the SNP said that Labour’s claims were "desperate" and that the situation unfolded very differently. An SNP candidate said that Mr Gray "turned tail" rather than face the First Minister.

In a comment on the Syniadau blog Welsh Agenda notes that in their recent party Election Broadcast the Conservatives featured David Cameron but there was no sign of Nick Bourne.

I received the postal election address from Janet Finch-Saunders, Aberconwy's Conservative candidate this morning. It contained the compulsory picture with Cameron, but look who seems to be standing in for Nick where you would expect to see a picture of the candidate with her Assembly leader! Paul Davies. So who will be leading the Conservatives in the Bay after May 6th?

Is there something that the Tories have forgotten to tell us? 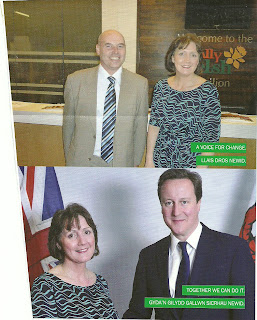 (We will) Create a Bilingual Nation – Introduce a Charter-Mark for businesses which will recognise Welsh language services. The scheme will be voluntary but will offer incentives for bilingual signage and Welsh language training for front-line staff.

As kitchen staff aren't front line and Carreg Môn doesn't appear to be a willing volunteer, what suport do the Tories offer these Welsh speaking workers?
Posted by Alwyn ap Huw at 03:48 4 comments:

Latest poster from United and Welsh 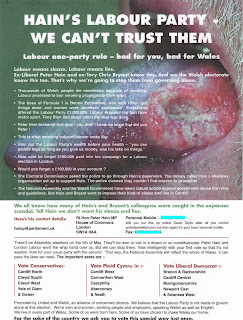 I have blocked out the phone numbers on the poster, apparently they were genuine.
Posted by Alwyn ap Huw at 15:15 5 comments:

Send a dog turd through the letter box – Vote Labour!

Labour's headline so far has been Vote Labour to send a Message to David Cameron and Nick Clegg. Essentially the political equivalent of putting a dog turd through their letterbox or ordering a pizza to be delivered to their house. Messaged delivered, now what?


A vote in the Assembly election based on Westminster issues is a wasted vote, no matter who you vote for. You might hate what the Conservatives are going to do with the Health Service in England, but that isn't a reason for ignoring what might be different policies that Conservative Assembly Candidates have for Wales – those differences need to be explored before deciding whether or not to vote Conservative in the Assembly Election.

How this election is decided must be decided on the message that each and every candidate from all parties have for the people of Wales over the next five years.

Plaid Cymru, The Conservatives and the Liberal Democrats are saying vote for us because this is what we are offering Wales!

Labour's message seems to be Sod Wales; the Assembly Vote has no Importance in its own right, it's just a way of protesting. Labour has form on this attitude.

However you decide to vote, please vote positively for what is best for Wales and vote for the party that can best support your aspirations in the Assembly - not in Westminster!

Don't waste your vote on a, Westminster annoying, game of shitty stick!
Posted by Alwyn ap Huw at 02:54 2 comments:

Is A Labour Vote in the Assembly Election a Vote for Middle England?

Will Paterson has an interesting post that highlights the fact that there are evident similarities between the Labour Party's Election Broadcast for the Scottish Parliament, The English Counties and the National Assembly.

The PEB's are not the only things that are similar between the campaigns in the three countries.

The main thrust of debate from Labour in the three elections is that a vote for Labour is a means to protect the Local Authority / Scotland / Wales from Westminster cuts; which is nonsense of course. County Council have little ability to protect their constituents from Central Government cuts, and it is scarcely possible for the Scottish and Welsh Governments to protect their residents from the cuts either, without the fiscal powers to do so.

The Welsh Assembly Government's record of protecting Wales from the Westminster cuts so far has been an abysmal list of failure: S4C, The Passport Office, St Athan etc. etc. Not that I'm blaming the Labour/PC coalition Government in the Bay for these failures - the Assembly, as it is, just doesn't have the power to resist the central ConDem attacks on Wales. But it is a dirty rotten lie to build peoples hopes up by claiming that a vote for Labour in the Assembly Elections is going to change the situation!

The third thing that is similar in the three campaigns is the decision to treat the three elections as a mid-term referendum on the failures of the Westminster Government.

Labour in all three countries attacks the Hairy Arsed Tory Monster and the Ogre of Thatcherism (whilst forgetting to mention that Labour continued to pursue Thatcherite policies and even praised Mrs Thatcher during its recent term of British Government). They also try to link all of their opponents to the Tories.

Linking Liberal Democrats to The Beast is an obvious tactic. The policy of linking the SNP also makes some sense; many of the successes of the SNP minority government have derived from the support of the Conservative Party in Parliament (although many of their failures to pass measures derive from the fact that Labour voted with the Conservatives to defeat them). But to follow the same narrative in Wales is ridiculous.

Okay Plaid doesn't say No! No! Never! to a coalition with the Conservatives, but the majority of its spokesmen have said that it is highly unlikely! And which party has Plaid actually been propping up in Welsh Government for the past four years?

The whole thrust of The Labour Campaign seems to be in the interest of the British Labour Party. The only purpose of a Labour Government in Wales will be to rehabilitate the UK Labour party at a Westminster level, not for the best governance of Wales for the benefit of Wales - a situation that is rotten enough in itself!

The frightening reality is, that if the main purpose of a Labour Government in the Bay is to restore some credulity to British Labour, it won't govern Wales in the interest of Wales - it will govern Wales in a way that appeals to those voters that Labour lost in Middle England in 2010, and that will be bad for Wales.
Posted by Alwyn ap Huw at 03:07 15 comments:

"English votes for English matters" is a non starter, it contains so many problems that it will cause more animosity and strife than it could possibly resolve.

What is an English matter? Under the current system few are, because if expenditure is involved (be it spending more or less) it has Barnet consequentials for the finances of the devolved bodies!

What happens to things that are neither English only nor UK wide issues such as England and Wales measures? And what about those things that are non devolved Wales only issues – S4C, Welsh water, the governance of Assembly elections? Will English MPs be allowed to vote on those issues?

As far as English regionalism is concerned England already has historic regions – they are called shires or counties and parishes. All the countries of the UK should, without doubt, re devolve many of the powers that the counties and the parishes had pre 1974, which have increasingly been centralised; but I see little desire for creating "new" regions for England.

From a Welsh nationalist point of view I don't like the idea of English regional devolution. Wales has its Assembly, at the moment, because it is one of the nations of the UK; regionalise England and Wales reverts to being a region of the UK.

There is no way that the clock can be turned back on devolution in the foreseeable future, and there is no way that the English question can remain unresolved. Any threat to abolish the devolved institutions will lead to Scottish, and possibly Welsh independence. So there appear to be only two options available independence for the nations of Britain or Federalism, perhaps we should have a UK wide referendum on which we all would prefer!

This post is a response to discussions on:
http://oggybloggyogwr.blogspot.com/2011/04/england-question.html

If any other bloggers have made reasonable and non racist comments on the issue and would like a link to their posts, please let me know.
Posted by Alwyn ap Huw at 02:26 7 comments:

There is little doubt that the site supposedly registered at Ieuan Wyn Jones' office address is a Labour attack site, a site designed specifically in order to enable Chris Bryant to repeat, under Parliamentary privilege, the slur that Plaid is a Tory stooge, which seems to be the Westminster Labour Party's main attack weapon against Plaid in the forthcoming Assembly Election.

Look at the evidence:

Which party gains from trying to claim that Plaid is conspiring with the ConDems in order to overthrow Labour?

Which party has a history of creating fake websites that backfire?

Who has been behind the other dodgy Labour websites and, as a member of Maes–E, loved to get up BlogMenai's nose in the political discussions on the site?

Who is the Labour staffer who would get great delight out of embroiling BlogMenai in a Labour set up?

The poster doesn't make any sense as a Plaid creation!

Plaid's number two target seat in this election is Clwyd West! Why on earth would any Plaid inspired campaign suggest voting against the party in its 2nd target seat?

This is clearly another stupid Labour Party dirty tricks set up, which like its other dirty tricks web campaigns is going to backfire. How stupid is the Labour party strategist who thought that the best way of attacking Plaid is by drawing attention to Labour's most vulnerable seats?

So if you are a Labour Supporter vote Plaid in Cardiff West, Carmarthen West, Caerphilly, Conwy and Neath – that is what your own Labour attack dog strategists seem to be asking you to do!

You might also like to vote Plaid in Cardiff North, Clwyd South, Clwyd West, The Vale of Glamorgan, Gower, Brec & Rad, Cardiff Central, Newport East and Swansea West. The Labour dirty tricks campaign clearly don't need or want you to vote Labour in these constituencies either – but why waste your vote on the ConDems?
Posted by Alwyn ap Huw at 02:25 3 comments:

There is no secret that I have a particular dislike for the Labour party, a party that has promised so much to Wales over the past hundred years but delivered so little and that I was bitterly disappointed that after a campaign in the last Assembly elections that promised to kick Labour into touch that Plaid decided to prop Labour up in government.

I suspect that propping up Labour is what Plaid will do again, however I was pleased to find that the party has a new web presence dedicated to attacking Labour:
http://www.wherewaslabour.plaidcymru.org/

1]The RSS feed isn't detected by Blogger so I can't put links to new attacks in my My Blog List feature to the left of this page.

2] When a website has a prominent Copyright Notice on every page it suggests that the site owners will come down like a ton of bricks on anybody who dares to copy the site's pages. I would have thought that viral copying of things like how Labour crapped on the miners would better serve the party.