I'm not a Graduate - but I benefit from an University Education

I had some legal difficulties to deal with earlier this year, so I contacted my solicitors Guthrie, Jones and Jones. Mr Guthrie Mr Jones and Mr Jones are all graduates.

I have had a chest infection over Christmas. Dr Jayaram has prescribed an antibiotic, which has made me better.

Gareth Hughes (a graduate Accountant) and co has helped me with my accounts.

My children will go to school next week and be educated by a host of teachers educated in the humanities and the sciences to degree level.

Having dealt with my legal, medicinal, financial and parental problems I was relieved to go home and relax in front of the telly and watch Bethan Gwasnas BA in a most entertaining telly programme.

I don't have a university degree, but I clearly benefit from university education!

Guthrie, Jones, Jones, Jayram, Hughes the teachers and Gwanas are all paid more than I am, but because they are paid more than me they already pay more tax than me - it is called income tax!

Despite not having a degree, - me and mine benefit from university education. I find the idea that we shouldn't pay our part for that benefit, by passing our debt in to student loans, quite obnoxious!
Posted by Alwyn ap Huw at 05:28 1 comment:

Last year I noted my disappointment that Father Christmas didn't visit Wales according to the missile and Santa watching agency NORAD.

It looks like my appeal has borne fruit, because this year I am pleased to say that NORAD did spot the great bearded one visiting Wales. 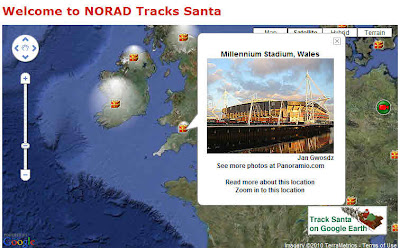 Best wishes for a good Christmas to all my readers, I hope that Father Christmas was generous to you on his visit.
Posted by Alwyn ap Huw at 02:23 No comments:

Apparently the reasoning behind the decision to put S4C in to the hands of the BBC is a lack of awareness in Westminster about the difference between the position of Gaelic in Scotland and Welsh in Wales. The Gaelic channel has been quite successful under the control of the Beeb, so the Welsh Language Channel could be run the same way seems to be the rationale.

I'm a relatively regular viewer of BBC Alba, I watch two or three programs every week, the channel broadcasts a number of extremely interesting documentary, historical and musical programs which are strong in content but tend to be weak in style.

For example I watched a program last week which discussed the way in which the poor in the highlands made beds of heather because no alternative bedding was available to them; something that I hadn't heard of before. The program was an eye opener, a testament to the ingenuity of man under the gravest circumstances, a great record of folk tradition, an education and extremely interesting, but in terms of broadcasting technique and quality it was weak. A Woman visited a man and said to him I understand that you know how to make a bed of heather. He answers yes I can-this is how it is done and then he makes a heather bed - a technically poor and cheap programme.

BBC Alba was launched two years ago as an experiment; there was a review of its first two years this week. For viewers of BBC Alba the news is encouraging, the channel has been a success and will continue for at least another five years.

But some of the questions that are raised in the review are of concern! For example should the channel be broadcast on the internet, rather than on the TV? (Not at the moment because the availability of the web is weak in the areas where Gaelic is strongest - but it might be a possibility in the future)! Is that a potential future for S4BBC too?


The Corporation is reluctant to secure a slot for BBC Alba on Freeview in Scotland unless some radio channels are lost to make room for it. It is almost certain that BBC Alba will not be available on Freeview thorough the UK. Apparently up to one third of the viewers of S4C are outwith the borders of Wales, will S4BBC sacrifice those viewers in order to accommodate other channels, thus diluting the numbers who use Welsh language broadcasting?

Given that there are only around 70 thousand native Gaelic speakers left, the BBC must be congratulated for the excellent provision, given the linguistic circumstances, to Gaelic viewers via BBC Alba, but we must be careful that the corporation doesn't assume that the same level of provision will be adequate for three quarters of a million Welsh speakers too!
Posted by Alwyn ap Huw at 06:16 1 comment:

Less than half way there somehow, somewhere, unfortunately.

Hold my hand rather than the Socialist Entrists hand and I may well take you there!
Posted by Alwyn ap Huw at 05:40 8 comments:

A prayer for those whose lives are to be endangered by the latest cost cutting exercise from the heartless bastards in the Con-Dem Government who put money before humanity.

Oh Christ whose voice the waters heard
And hushed their raging at Thy word
Who walkest on the foamy deep
And how amidst the storm did sleep
O hear us when we cry to Thee
For those in Peril on the sea.

Even an atheist would agree that there is a better chance that God will take more heed of the needs of those in Peril on the Sea than either Cameron or Clegg!
Posted by Alwyn ap Huw at 03:35 No comments:

Challenging the Druid of Anglesey is Laudanum; Iolo Morganwg apparently invented neo-druidism under the influence of the drug.

Every election seems to throw up some new short term blogs for the campaign. The four Plaid hopefuls in the North Wales region are the first off the mark for 2011.
Posted by Alwyn ap Huw at 01:41 5 comments:

No Ifs No Buts No Police Service Cuts!

I wonder if any of those Policemen who seemed so eager to baton the heads of sixteen year old children on the streets of London yesterday, with a certain amount of glee, realise that their jobs are also on the line under the ConDem cuts agenda!

That kid you bludgeoned might be protesting for your job too!

How odd. I support Plaid Cymru's position and Alan in Dyfed opposes it. Usually it is the other way around!

Alan praises the Lib Dem's on Welsh Language policy and criticises Plaid – he is wrong.

Having been canvassed by Liberal Democrats in Aberconwy and having heard from family members resident in Cardigan about Lib Dem canvassing any support for the language by Lib Dems is obviously opportunist. Lib Dem supporters were using the Language Measure as an example of Plaid forcing the language on non Welsh speaking residents last May; now they are trying to say that the Measure doesn't go far enoughand that Plaid have welshed on the Welsh Language!

There is a failure in the devolution settlement. The Assembly has the right to legislate on the Welsh Language, but not on the Languages of Wales. A measure that says that English and Welsh are both official languages would be illegal; a statement that English and Welsh have equal legal status would be retrograde because the English language is NOT an official Language in England & Wales. It is our de-facto language. I don't think that a measure that made Welsh the de-facto language of Wales would be acceptable to the majority of Welsh people now.

I would like the Assembly to have the responsibility to legislate on all the languages of Wales and to be able to state, unambiguously, that Welsh, English and BSL are the official languages of Wales, all with equal validity, but it doesn't have that competency!

The problem isn't what the Measure includes, but how broad an Assembly Measure on the languages of Wales can be. The Plaid / Labour coalition has passed the best possible measure in support of the Welsh language that it is competent to pass.

If the Lib Dems don't think that the current Measure is good enough, they are in government on an UK level, they can ask their ministers to give further language competence to the National Assembly, in order to enable the Assembly to strengthen the Measure, but I won't hold my breath waiting for them to do so.
Posted by Alwyn ap Huw at 02:08 1 comment: