Others have been trying to predict the results of the May elections, so I have decided to join in the fun.

The Independent Candidates. Loses 1 (1)
I foresee John Mareck keeping his seat in Wrexham but Trish Law losing hers in Blaenau Gwent. I don't think that Ron Davies in Caerphilly or People's Voice in Torfaen have a hope of winning.

Polish people are fairly new to the concept of democracy, so new that they value the right to vote and are highly likely to use their vote. There is a strong Polish community in Wrexham and John Mareck has been vigorously courting its vote. The Polish vote may be enough to save him by the seat of his pants. Trish Law has proved herself to be an acceptable constituency AM, but she faces two problems in May. Firstly that Plaid, Conservative and Lib Dem voters who have lent her and her late husband their votes are likely to return to their traditional folds. Secondly, and more importantly, the bad publicity given to Dai Davies' record in Westminster is going to send many of Mrs Law's old supporters back to Labour

The Liberal Democrats. Gains 2 (8)
I can't see the Lib Dems winning any additional constituency seats. The antics of the local MP may actually put Montgomeryshire within the grasp of the Conservatives, but I suspect that Mick Bates will scrape his way back to the Senedd by the skin of his teeth. The Lib Dems have a theoretical chance of winning up to four new list seats if the Tories do extremely well in the elections, but I am going to compromise and give them just two of the four

The Conservative Party. Gains 1 (12)
This is the most difficult party to forecast. At the moment 10 of the Tories' 11 seats are list based. There is no doubt, that in May, the party will win many more constituency seats. The difficulty arises from trying to forecast the effects that wining constituencies will have on current list member numbers.

If they did exceptionally well nine constituencies are within the Tories' grasp and they could win them all and still have four list seats, which would give them a total of a measly 13 seats.

Plaid Cymru Gains 7 (19)
I can't see Plaid losing any of its constituency seats (although keeping Ynys Môn from the Tories will be tight). Aberconwy is within Plaid's grasp, but I tend to think that the Tories will have it; gaining Wigley on the list will be a good enough consolation prize for most Plaid supporters in losing Gareth Jones in the constituency. Plaid will win in Llanelli, but as happened in 1999 this will result in a list seat for Labour at the Tories expense. Plaid Cymru is probably the only party that can increase the number of both list and constituency seats, I suspect that this will happen. Cwm Cynnon, Caerphilly and another two valleys seats will be won by Plaid, they will also win two extra list seats. My prediction is 19 seats for Plaid

The Land of my Mothers 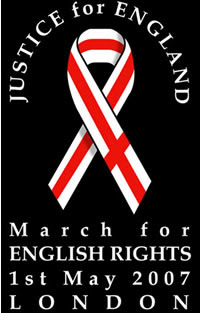 Like many Welsh Nationalists I am not Pure Welsh. My family tree contains many non-Welsh names such as Purcell, Smallman, Crump etc. From a genealogical point of view I am probably as much an Englishman as I am a Welshman. My place as a little cog in the World's mechanism is, however, undoubtedly a Welsh one.

Because of the family tree and other connections I am very fond of England, and feel more miserable than usual when I hear some Welsh Nationalists slagging of the Land of my Mothers.

I support independence for England; I support the right of England to play its part as one of the free nations of the world without being shackled to Wales and Scotland.

The argument that Welsh Nationalists are anti-English should be nailed on the head. The anti-English are the same people who are anti-Welsh they are the Unionists who oppose freedom for both Wales and England

Back in December the councillors of the Borough of Burnley in Lancashire met. One of their duties was to select one of their members to represent the council on an outside body. Two councillors stood for nomination Cllr. Gauton Labour and Cllr Wilkinson from the BNP. Despite the fact that all major political parties have roundly condemned the BNP two Liberal Democrat councillors chose to support the BNP contender.
After a Labour Councillor wrote to the local paper to complain about the Lib Dems supporting the BNP there came a reply from one of the Liberals justifying his decision on the grounds that
The Lib Dems are, by their very name, liberal-minded and democratic. We vote how we think the needs of the people are best-served.
So it is clear that some Lib Dems believe that the needs of the people are sometimes best served by Fascists!

I accept that there are fools in every party, and that it would be unfair to condemn a whole party because of the activities of one or two fools. However what does surprise me and does reflect badly on the Liberal Democrats as a whole, is that three months later these councillors remain official party representatives; they have not been expelled by the party or disciplined in any way and not a word has been heard from any senior party member condemning the councillors actions or dissociating the party from them.

I have had complaints that I Blog without Blogging myself

The only reason why I opened a Blogger account was in order to respond to points made by people of greater importance than me.

I doubt that I have much to say that is either important or original. But the keepers of the important blogs think that they should have the opportunity to pay me back by posting nasty comment about me on a site that I edit - here is their opportunity! I must now scratch my head to think of something worth saying on this site.
Posted by Alwyn ap Huw at 00:35 No comments: