As a part of Click on Wales' season of post about the position of Plaid Cymru, there is an interesting article by Gwion Owain about Plaid Cymru's Socialist Platform.

There is also an interesting response to the post from Glyn Beddau on the National Left Blog.

Being a one nation conservative type nationalist I don't agree entirely with either post, but I tend to favour Gwion's position.

I hate Socialism with a capital H A T E! So why wrap those Plaid policies that I agree with in a wrapping that I will chuck in the bin before opening?

I was a member of Plaid in the days that it was seen as the nonconformist chapels at prayer. When Dr Gwynfor Evans was the president of the Congregationalist Union, when the Rev Dr Tudur Jones, was vice president, when the Rev D Pennar Davies and the Rev Poet O.M.Lloyd were the backbone of the party. I was a member of the party when the young Dafydd Elis Thomas discarded the tradition of his father's generation by turning Plaid into a, so called, Socialist Party!

What's odd is that in changing Plaid from a chapel party to a lefties party Plaid's values have hardly changed at all, so why insist on calling a value socialist in order to piss me and my like off and alienate us?

Why not call policies Best for Wales and entice both right wing nationalists, like me, and my socialist friends in the national cause to support them?
Posted by Alwyn ap Huw at 04:51 12 comments:

Anybody who has ever read this blog will know that Ms Wood and I are poles apart politically.

I won't bother to go into specifics, because a simple Google search can do a better job, and a Google search will show, without doubt, that Ms Wood and I are not bedfellows – by a long, long, long way!

I'm a right winger; Leanne is very much to my antipathy –she's a horrid lefty!

I hate left wing politics in my belly, my heart and my brain, but there is a warmth in all my organs that burns warmer than left v right and that is the fire for Welsh independence

The only person who is four square on independence in the Plaid leadership poll is Leanne.

I am almost tempted to re-join the party and start a Hydro for Leanne group – in order to to embarrass her! (Note for youngsters: Hydro was the right wing group in Plaid before you or Ms Wood were even born)

Let there be no doubt, I will oppose Leanne's leftism, but at least I will have a principal to oppose if Leanne is elected party leader, rather than the wishy washy nothing that the other candidates seem to be offering.

And in real politics, Plaid has had a leader to ignore for the last 10 years.

Leanne's strength is you can love her or hate her but you cannot ignore her!

And Plaid's problem over recent years is that it has been ignored!

When I left school without the A levels that I needed to fulfil my academic dreams I was put on a job creation programme in my local library. I loved the scheme whilst it lasted!

I learned more in those six months than I had learned in a previous lifetime of school. There was something almost magical in handling so many books. Even without reading them, just stamping a book with this book is the property of Gwynedd Council and knowing on which shelf to place it gave me new information about the latitude of human knowledge, experience and insight. It was probably the most influential six months of my life!

But it was still cheap, and useless, labour!

It was a scheme that would never have allowed me to become a librarian or to get even the lowest job in a library. After six months of infatuation with the process I was kicked out because my term had ended, and some other person was inducted to the joys of librarianship in my stead with the same non chance of having a career in the library service.

Given the resignations of the Apprenticeship Tsars I hope that the Westminster Government will look again at the meaning of apprenticeship and give young people the hope of gaining employment as electricians, plumbers, mechanics, librarians etc, rather than doing what Mrs Thatcher did – dangling the smell of such jobs under their noses in the knowledge that those jobs were never going to be available to them!

But I doubt it – getting kids through schemes, in order to keep them off the streets for a few months is easy politics – giving them meaningful apprenticeships that will lead to lifelong skills and employment is a real challenge that the ConDem Government is too frightened to contemplate.
Posted by Alwyn ap Huw at 09:00 3 comments:

The Six Nations in the North 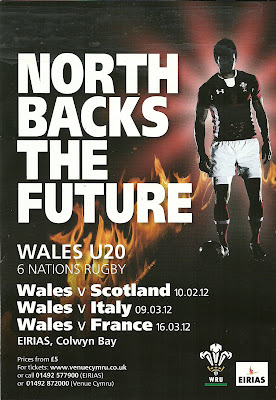 All of the under twenty - Six Nations home Welsh Rugby international games this year and next, will be played at the new Eirias Park stadium in Colwyn Bay. I would like to urge all supporters of the oval ball in the North to try to attend one or more of these matches.

Attending an international match in Cardiff given the cost of transport, ticket and accommodation is way beyond many of us! For only Five Quid we can support Wales on Eirias Park in Six Nations Internationals!

More importantly, a good show of support may keep these games in Colwyn Bay beyond 2013, and may also prove to some of the southern-centric members of the WRU, that supporting and developing Rugby in the North will be beneficial for all of Welsh Rugby.

Tickets are available from Conwy Council, Venue Cymru and most Tesco stores in the north of Wales
Posted by Alwyn ap Huw at 04:26 No comments:

What is the Labour and Tory Vision for an Independent Scotland?

In trying to follow the Scottish Independence referendum debate, there is one strain of argument that confuses me. It is the argument where Unionists (usually) ask questions about the policies that an Independent Scottish Government would follow, which are sometimes answered, quite authoritively, by Nationalists.

What sort of currency would an independent Scotland have?

What would Scotland's defence policies be? If England went to War would Scotland Support England? How many Aeroplanes would the Scots Air Force have?

How would Scotland deal with welfare and benefits? Would taxes be higher, lower, or similar?

What sort of economic policies would an Independent Scotland follow? What would Scotland's international relations be like?

They are all fair questions, I suppose. They may be questions that an "undecided" might want an answer to. They might be questions that a truly independent commentator (if such a creature exists) might be able to guess at by looking at the historic polity of Scotland.

But are they questions for the YES side alone?

The idea that the SNP should be forced to answer these policy questions whilst the unionists snigger is bad for the possible future of Scottish politics.

If Scotland votes Yes the first elected independent parliament may not be formed by the SNP. Voters may think that, having achieved its goal, the SNP is defunct. There may be a Labour Government, possibly even a Conservative Government in the newly Independent Holyrood Parliament.

I have been receiving odd e-mails, comments etc, that suggest that I might be standing election for a New Nationalist Party, as an Independent Nationalist a Plaid Candidate or even as a Conservative Party Candidate for the Llansanffraid ward of Conwy County Council next May!

NONE of these rumours are true! I will vote for and give my wholehearted support to the re-election of Graham (Gas) Rees, regardless of whoever else is standing, on the County ballot!

I will be standing in my own name on my own ticket - but I hope that I can count on your support!
Posted by Alwyn ap Huw at 05:49 1 comment:

It is no secret that my ideas of centre right Welsh Nationalism are directly opposed to Leanne Wood's Socialism and Republicanism.

As I have repeated ad-nausium on this blog socialism is dependent on the state, the state on which Wales now depends is the British state; until we throw off the shackles of state control Wales can never be free!

Leanne and I are not in tune re socialism and republicanism, but there is an issue where Leanne and I are in four square agreement and that is on the issue of the Welsh Language and Welsh Culture.

Despite the Western Mails bollocks comment: The fact that she is not a Welsh speaker would be an enormous advantage in dispelling the still widely held view that Plaid is essentially a party for Welsh speakers. I can guarantee that Leanne can and does speak Welsh - I have never conversed with her in English!

And I can assure all cultural nationalists that Leanne's love and support of our culture is genuine and heartfelt.

This is not an endorsement – just a statement of fact!
Posted by Alwyn ap Huw at 07:57 22 comments: